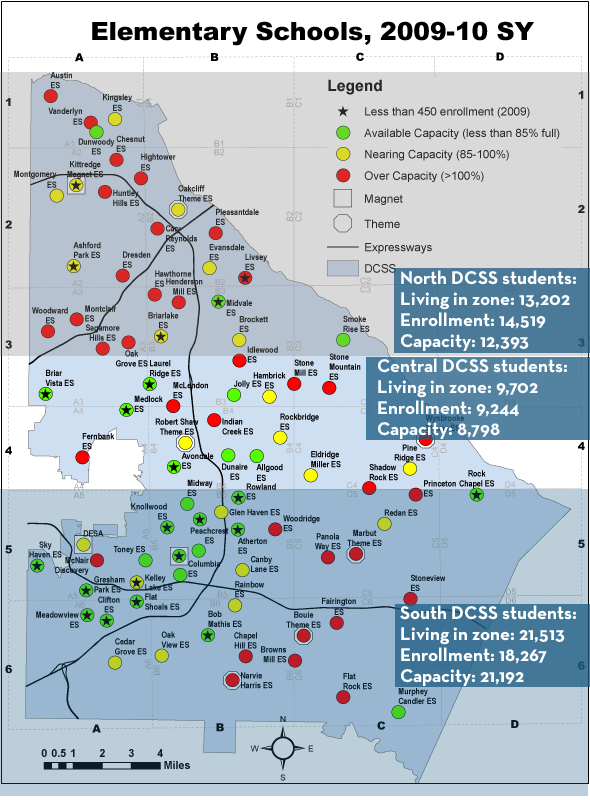 Melvin Johnson, chairman of the DeKalb County Board of Education, said no one could have guessed that DeKalb would become the go-to location for immigrants and refugees.

“There was a trend that there would be fewer people here than (the number of schools) called for,” he said. “The main thing to focus on is the history of what we’re trying to fix. We have over a half billion dollars in needs, and you can’t fix it unless you’ve got the money.

“No one ignored it. It just ballooned at a faster rate.” 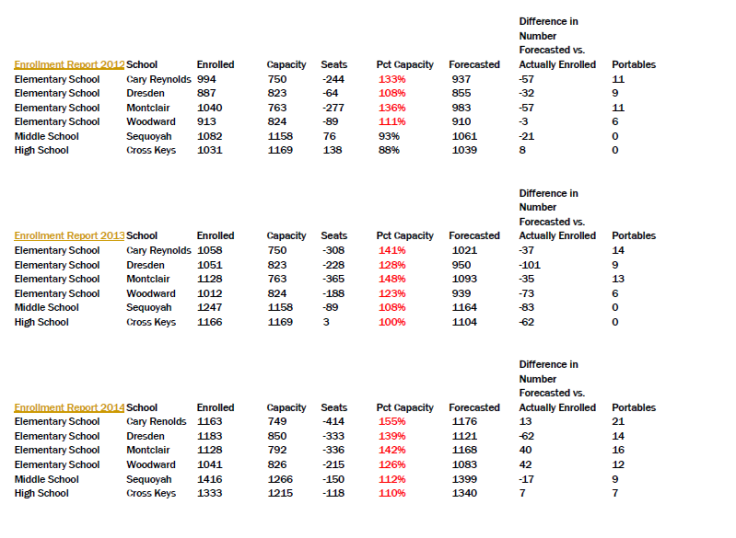 I extrapolated these numbers from the charts (linked below), which show enrollment projections for all DeKalb County schools (via the district’s Planning Department). Data from previous years was not available on the Planning Department site, but this table from the former DeKalb School Watch Blog archive shows that all the elementary schools were over-capacity during the 2010 school year.

I understand that projections are by no means definite. However, for the last 3 years, the projected numbers for the Cross Keys cluster have been quite close to actual enrollment numbers. According to the charts above, all of the elementary schools in the cluster have been over-capacity since 2012 (2010 if we count the chart that is no longer available on the school district’s website).

If we don’t pay attention to these enrollment projections more closely in the future, I’m afraid many other clusters are going to face the same crisis that the Cross Keys cluster is currently experiencing.

l’m passionate about public education, especially its role in fighting poverty. Education gives people a chance to succeed, even when the odds are stacked against them. Rebekah taught English for six years at Berkmar High School in Gwinnett County Public Schools and for two years at Cross Keys High School in the DeKalb County School District (both Title I schools). During her time as a teacher, she coached volleyball and basketball, served as the Co-President for the Berkmar High School PTSA, participated as the teacher liaison on the School Council at Cross Keys High School, and helped spark the student-led initiative Unify BuHi. In the past, she has also worked for the Center for Pan Asian Community Services (CPACS) doing advocacy and civic/community engagement. She has served on the Board of Directors for Presencia, a non-profit located on Buford Highway that exists to provide economic, educational, and social support to refugees and immigrants through after-school programs, job creation, and leadership development. In addition to this work, she has also worked for the Atlanta Children’s Shelter and for the Latin American Association teen summer program. Throughout the past few years, she has spent her time co-founding Vecinos with an incredible group of Cross Keys cluster students, alumni, and residents to establish a community association within the apartment complexes along Buford Highway. The idea of vecinos or neighbors working alongside one another is integral to the idea of a strong, healthy community. This year, Rebekah begins studying law at Georgia State University. She also serves on the Doraville City Council. Rebekah lives in Doraville, Georgia, with her husband, Andrew Morris, who works for the Metro Water District at the Atlanta Regional Commission. She has two beautiful daughters. Please email rebekahcmorris@gmail.com with any questions or concerns. To submit a guest piece, please send the article (up to 1400 words) and a brief biographical note.

3 thoughts on “Response to AJC Article on Cross Keys Overcrowding”